The US Labor Department released it’s employment report this morning and showed employers are still hiring. 227,000 jobs were added in February which 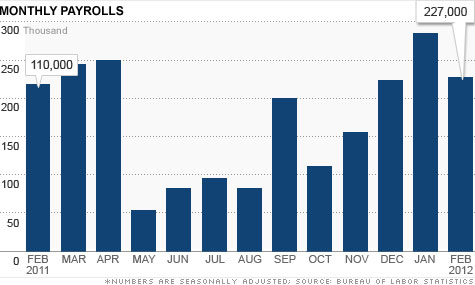 The US Labor Department released it’s employment report this morning and showed employers are still hiring. 227,000 jobs were added in February which was a bit lower than the 284,000 jobs added in January but still ahead of where we were this time last year and better than expected. Economists had been expecting the economy to add 210,000 jobs last month.  The unemployment rate remained at 8.3% which is in line with expectations.

Private businesses were the main driver of job growth, and have been adding jobs consistently since March 2010. In February, they added 233,000 jobs. Professional and business services added 82,000 jobs, but more than half of those were at temp agencies. The manufacturing sector added 31,000 jobs, health care added 49,000 jobs and restaurants and bars added 41,000 jobs.

For sales people, the numbers continue to be strong. 186,000 new sales jobs were created since February 2011. Unemployment rates among those in sales and related occupations is now at 7.9% compared to the overall unemployment rate of 8.3%. This makes sense because if you are generating revenue, your job should be secure. Great sales people are always in high demand in good times and bad. If continually sharpen your selling skills, improve your negotiation abilities and hit your sales quotas, you should never be out of a job.

While the economy is not out of the woods in the US, sales people are still in high demand and the market for new sales jobs is and should continue to be strong.